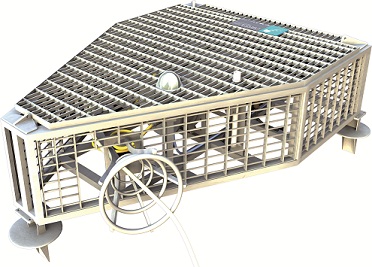 The structure is designed to house and protect several elements from external factors. The structure can also withstand the traction of the marine cable generated by the water currents. The main cylinder that holds the control electronics will be situated inside this structure. This cylinder is designed to withstand water pressure at 300m and will provide the interface between the marine cable and many marine instruments connected to the observatory. The marine cable is a telecommunication cable donated by Telefonica company and is made up of 6 monomode fiber optics for data transmission and two conductor tubes for power supply. This cable acts as an umbilical cord between the land station and the marine node and provides continuous transmission of data and supply of power for its operation.

The structure is designed to house and protect several elements from external factors. The structure can also withstand the traction of the marine cable generated by the water currents.

Furthermore, we have a buoy, which serves as an extension of the OBSEA observatory. It works as a useful platform for oceanographic and environmental parameters measurements. It is used as a testbed for marine sensors and equipment. The buoy is located 40m next to the OBSEA, and it is subject with three anchors of 1200kg attached to it with chains. It has a video surveillance camera and a weather station with GPS that measures wind direction, wind speed, barometric pressure, air temperature among other parameters. See the metadata of the Buoy

The CTD records temperature, salinity and pressure at different sampling intervals, providing information on flows and blends and their seasonal variations. We have the CTD16 and the CTD37.

A broadband hydrophone (7 Hz to 100 kHz) characterizes acoustically ambient noise and discriminates coherent signals from natural sources from anthropogenic signals. See the metadata of the Hydrophone

An underwater camera provides real time video allowing the surveillance of the platform, showing images of wildlife in the environment of the platform.

The AWAC is an acoustic Doppler current profiler and a wave measurement system. It allows the measurement of the water speed and direction in different layers, from the seabed to the surface. All kinds of waves can be measured: long, stormy, short wind waves or transitional waves generated by local maritime traffic. See the metadata of the AWAC

It is well known that the increase in CO2 content in the atmosphere due to human activities is causing, through the greenhouse effect, global warming. A lot of the CO2 that humans emit is being absorbed by the oceans and seas, causing a progressive acidification of the water. This shift toward more acidic conditions is associated with a number of adverse effects on marine organisms, especially for those who calcify, such as corals, mussels, coccolithophore algae or pteropods. To obtain information about the evolution of the concentration of CO2 in the atmosphere an automated station has been designed in the Vilanova i la Geltrú area. The measurement system is based on the use of an equipment to measure CO2, the LICOR 820. See the metadata of the LICOR 820

To detect any tectonic movement worldwide we use a broadband seismometer. Movements are referenced to a universal time base (GPS) that allows comparing and verifying data globally thanks to the use of the synchronization protocol IEEE-1588. The equipment consists of a Trillium 120P/PA together with a Taurus acquisition system and a commercial land seismometer conditioned for its underwater location using a waterproof housing See the metadata of the Seismometer

At the ground station, located in the Centre Tecnològic de Vilanova i la Geltrú there is another weather station that measures and records regularly various meteorological variables. See the metadata of the ground station